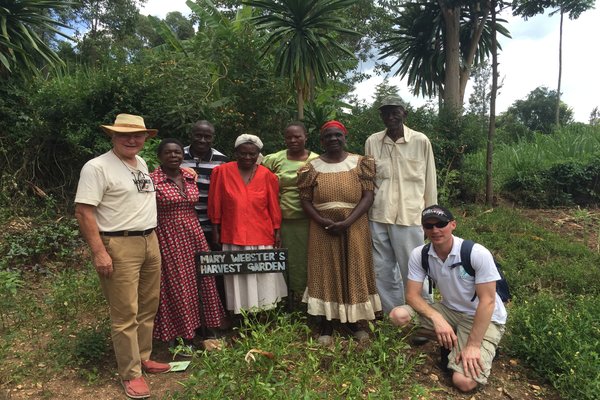 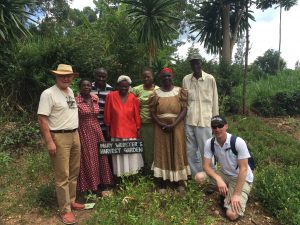 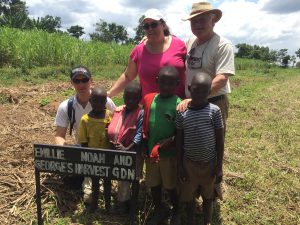 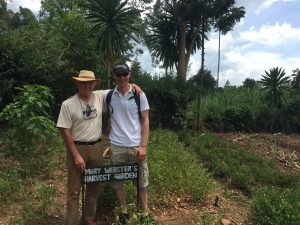 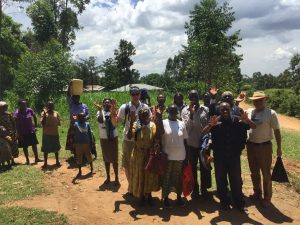 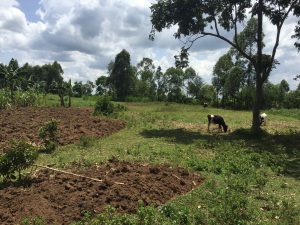 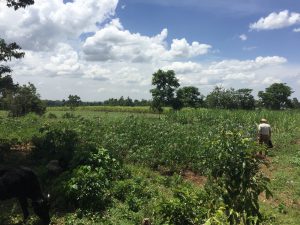 In October 2016 my Father and I visited numerous Harvest Garden projects in Kenya.

We flew into Nairobi and took an internal flight to Kisumu (next to Lake Victoria), from Kisumu we travelled by car to Kakamega town and were met and greeted by Franc and his brother Leon who were our guides and hosts for the trip. We stayed with Franc and Leon for the following 7 days. Franc works within the Harvest Garden projects.

The projects work as follows:

– Jessica receives a £500 donation from sponsors, which funds the cost of a new Harvest Garden.

– Garden allocation and production works on an allocation basis. So people (new projects) are referred by the individuals and families from successful garden projects. This gives the Charity more confidence that the new garden will be successful.

– The referral system operates due to the sustained efforts and on-going commitment required to produce and maintain a successful harvest garden.

– Franc and other trainers in Kenya (and other countries in Africa) will visit the referred garden site and spend a week with the individuals and families of the new garden. This week is intense. Franc and the trainers will train the people in the farming methodologies required to initiate and sustain a harvest garden. This includes double digging, the use of mulch, crop rotation, crop variety, farming principles, seed planting, harvesting, seed production, ‘bed’ size and structure to name but a few.

– The double digging principle allows for soil regeneration and moist soil to be used, it’s one of the keys to success and allows for crop growth without the need for irrigation or fertilizer.

– Franc and the other trainers will then visit the projects periodically to check in on how they are doing.

Many people in Kenya grow sugarcane. These crops can take up to two years to grow. Farmers often have to take loans out to fund their initial production. These loans accumulate. By the time the crop is harvested, many people experience negative equity and end up worse off than when they started.

So during the trip we visited approximately 10 harvest garden projects, including two Mary Webster gardens that we funded in memory of my dear Mum. The gardens we visited were at different stages, some were expansive and mature, and some were smaller and more recently started.

There were a number of similarities throughout: the people working the projects had a very significant sense of worth, they were happy, they were feeding themselves, their families and in some instances selling crops due to the volume of production they were churning.

One family in the ‘Betty Loretta’ garden had built houses, sent their children to good schools, bought cattle from the fruits of their efforts within the garden project. Truly life-changing.

In one of the Mary Webster gardens, the gentleman behind the project was an inspiration, a true inspiration. He told us that before his garden project began he was ‘nobody’! Now that the gardens had given him a purpose in life, food to eat, crops to sell, he felt like a pillar in the local community. People respected him. He has bought cattle, sent his children to school, in all areas his and his family’s lives had improved. It was amazing to witness.

Some of the locations we visited the people there treated us like royalty, children singing to us, people hanging tinsel around our necks, families asking us to plant trees in their garden for good luck. I asked Jessica why and she asked me how I would feel in the presence of billionaires! To the people that we visited this is how we were perceived. Of course they were very grateful for our support and donations. This was a little overwhelming and made me feel uncomfortable. We weren’t looking for praise or glorification and that’s what it felt like.

Franc, our host and guide, also took us to an orphanage. I should add at this point that Franc is an amazing chap. He runs an Orphanage himself and is involved in many projects involving the safeguarding of young children and orphans. Franc has three children with his wife and oozes quality, goodness, kindness and sincerity. Like many people in Kenya Franc is a true Christian. I walked into the orphanage and couldn’t really believe my eyes.

I walked into a room maybe 5 metres by 6, in one corner there was an iron pen with about 6 or 7 infants in there clambering over one another, no toys, no pictures on the walls, just an iron pen and a concrete floor. On the main of the floor were two padded mats, maybe about 2 metres square each. On each mat were approximately 10-13 tiny babies from newborn to about 3 months old.

I stood back to take in what I was seeing, notably: no toys, a few staff busying themselves with feeding and doing what they can to care for the children, basic equipment, children laying or standing with no stimulation other than the baby lying next to them, a few chairs and pieces of old furniture, a wash room next door, concrete floor, concrete walls, plastic cups and bowls aligned on a shelf and a mass of very young children without what most people know as a family, without parents. Being a westerner, a Father and the owner of a pre-school nursery, the environment was a million miles from what we are accustomed to in the west.

However, the children were cared for, fed, held and comforted, warm, stimulated by their environment, safe and ultimately, loved by their newly found guardians.

The orphanage was funded and owned by a Canadian Gentleman (who I have since met). This Gentleman buys and sells houses in Canada to fund this orphanage. He spends 3 months a year in Kenya working at the orphanage. His life is devoted to these children, he has exchanged a privileged lifestyle for one of extreme hard work, dedication and in many ways, hardship.

One of the staff told me to pick a baby up, she obviously noticed my shocked demeanor and goofy expression. So I picked up a 2-month-old baby, I was expecting a certain weight in my hands but the child weighed quite a bit less than I had expected. The lady told me that this baby had been found in a toilet! I worked hard to hold back the tears. Most Kenyan toilets are holes in the ground, cesspits as such. I couldn’t help but wonder why.

I had a small child in my arms that has no parents, an extremely difficult future and a mass of uncertainty to deal with. But the child had hope, the child had a chance, but clearly the child’s life was going to be very challenging indeed, lacking many things that most westerners take for granted.

Most abandoned children are left in hospitals, some are disregarded by other means. It’s not uncommon for children to be left to die in the gutter.

You may have tears in your eyes reading this, I’m sure you will find it hard to comprehend.

On this particular day of the trip I really struggled to keep it together.

There are many reasons why children are abandoned, I will write some more about this in another blog.

When people asked ‘how was your trip?’ – It was hard to answer what’s usually such a straightforward question. Hard to find the right words to describe. I guess ‘emotional’ and ‘inspiring’ are fairly accurate words to use.